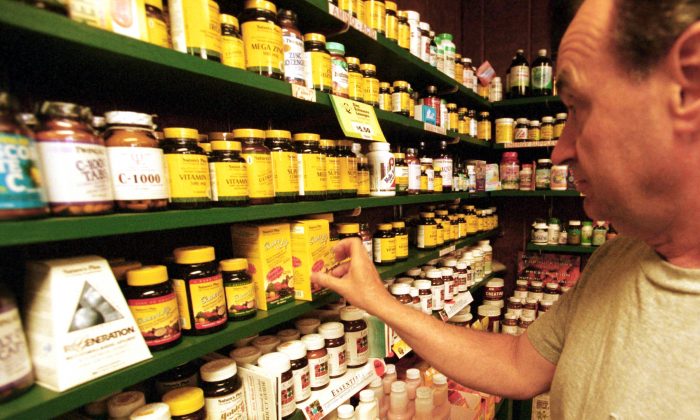 If you are taking vitamins, there is a good chance that they were imported from China.

An aging population and growing focus on health in the United States has fueled the growth of a $28 billion vitamin and nutritional supplement market, and it is expected to continue to grow at about 3 percent a year.

Over half of American adults are popping vitamins and supplements. They may not be aware they are eating products made in China, or made using raw materials from China.

China has captured over 90 percent of the Vitamin C market in the United States, according to the Seattle Times. Think about how many labels advertise added Vitamin C. Vitamin C goes into many food and drink products—almost all processed food for humans as well as pets contains Vitamin C.

The consumer has no way of knowing the added vitamin C comes from China, because there is no rule requiring labeling the country of origin for ingredients.

This may raise quite a few eyebrows as Chinese food safety scandals make headlines every day.

Here are five facts any consumer of vitamins should know:

2. China’s top vitamin and supplement production areas are among the most polluted in the country (and thus in the world).

Vitamins and nutritional supplements usually use agricultural products as key raw materials. The top vitamin exporting province, Zhejiang, has an alarming level of soil pollution from heavy metal. As matter of fact, one-sixth of China’s farmlands are heavily polluted.

For example, rice planted in several key agricultural provinces was reported to contain excessive Cadmium, a metal commonly found in batteries, coloring, and the industrial waste from making plastic. It may cause serious kidney disease.

3. Even those labeled as “organic” are not safe, since USDA organic standards place no limit on levels of heavy metal contamination for certified organic foods.

4. Approximately 6,300 Americans nationwide complained about adverse reactions to dietary supplements between 2008 and 2012, according to FDA statistics. But the actual number may be more than eight times higher, some experts say, because most people don’t believe health products can make them sick. While not all such problems would be caused by pollution in China, that pollution may have played a role.

5. Worst of all, China-made vitamins are everywhere, and even those who do not consume vitamins and supplements can hardly escape. Many vitamins end up as ingredients in items like soft drinks, food, animal feed, and even cosmetics.