Prime Minister Viktor Orban in a radio interview accused the “Soros Network” of organising migration across the Balkans.

via Orban: Soros is the world’s Nr1 oligarch — Hungary Journal

The European Commission has “derailed” the European Union’s enlargement process, “hugely impacting the security and future of Europe”, Foreign Minister Peter Szijjarto told MTI from Helsinki on Friday, on the sidelines of a meeting of his EU counterparts.

More than 100,000 people have signed a petition accusing billionaire investor George Soros of sedition against the US, demanding that he and his affiliates be declared “domestic terrorists” and that his assets be seized. The petition initially launched by “E.B.” on the White House petitions website reads: “Whereas George Soros has willfully and on an […]

via It’s about time! Over 200,000 Patriots Sign White House Petition to Declare George Soros a terrorist — Welcome to Hummingbird027’s page

The European Commission has decided to refer Hungary to the Court of Justice of the European Union over its “Stop Soros” package of laws, initiating the third phase of the ongoing infringement procedure in connection with that legislation.

“It has once again been made clear that pro-migration forces want to make the United Nations’ global migration compact, the world’s most dangerous migration document, mandatory,” Hungary’s foreign minister said on Monday.

via Szijjarto warns of “most dangerous migration compact” — Hungary Journal

Hungary wants the European Council to accept the position that migration should be stopped rather than managed, Zoltan Kovacs, the state secretary for international communications and relations, said during a visit to London on Monday.

Hard to believe that I wrote this article four years ago. I want the reader to see clearly how this invasion of Muslims into Europe was accomplished. When the United Nations teams up with George Soros – watch out world!! Original article from 2015 In this past September’s Sustainable Development Summit at the United Nations, […]

via Flashback From Four Years Ago: George Soros Admits to Funding the Forced Migration of Muslims Put into Place by the U.N – A Step Closer to the NWO — Absolute Truth from the Word of God 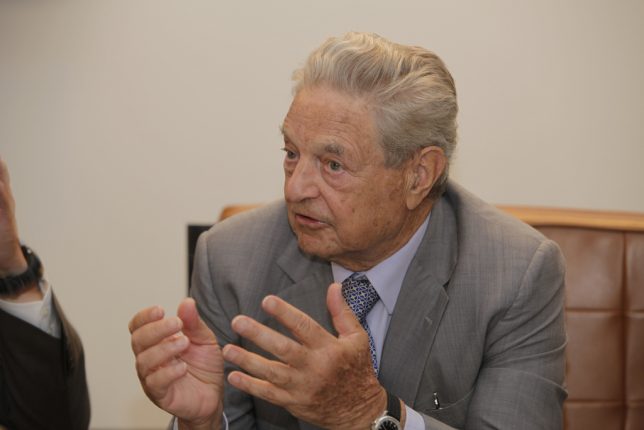 Left-wing financier George Soros is planning to profit from the illegal immigration crises in the United States and the European Union that he was instrumental in creating.

Soros traffics in revolution and human misery. His devious business deals have brought the financial systems of the United Kingdom and Malaysia to their knees. Soros helped finance the 1989 “Velvet Revolution” in then-Czechoslovakia. He acknowledged having orchestrated coups in Croatia, Georgia, Slovakia, and Yugoslavia.

Soros’s complaints against America are many. “The main obstacle to a stable and just world order is the United States,” he has said. Soros praises Communist China effusively and has said the totalitarian nation—which cuts babies in unauthorized pregnancies from the wombs of their mothers, tortures and kills religious dissenters, and runs over eminent domain resisters with steam-rollers—has “a better-functioning government than the United States.” In the U.S. he has financed the violent, politically destabilizing Occupy Wall Street and Black Lives Matter movements.

Now the preeminent funder of border-busting campaigns in the U.S. and overseas has entered into a partnership with credit card giant MasterCard Inc. to create something called Humanity Ventures.

In recent years Soros has focused on making grants through his Open Society Foundations to various nonprofits, but this new project has for-profit goals.

“Humanity Ventures is intended to be profitable so as to stimulate involvement from other businesspeople,” Soros and MasterCard said in a joint press release.

The claimed objective is to make the lives of “migrants” better through spending on education, health care, and economic development.

“Migrants are often forced into lives of despair in their host communities because they cannot gain access to financial, healthcare and government services,” they said, ignoring the veritable minefield of taxpayer-funded assistance available to illegal aliens in the U.S.

“Our potential investment in this social enterprise, coupled with MasterCard’s ability to create products that serve vulnerable communities, can show how private capital can play a constructive role in solving social problems.”

Any profit Soros and his billionaire buddies in the left-wing donors’ consortium, the Democracy Alliance, extract from the operations of Humanity Ventures can be used to fund more left-wing activism. Perhaps the money can be used to finance the future presidential runs of Keith Ellison and Chelsea Clinton.

This new venture comes as countries like Soros’s native Hungary and Macedonia are threatening to kick his operations out.

Hungarian Prime Minister Viktor Orban said last month that the year 2017 would be “about the extrusion of George Soros and the forces symbolized by him.” Every country “will want to displace Soros,” he said. “This can already be seen in Europe. They investigate where the money comes from, what kind of intelligence connections there are, which NGOs represent what interests.”

Soros admitted in 2015 that his efforts in Europe are aimed at destroying national borders on that continent. He has cheerleaded the ongoing invasion of Europe by aliens, especially Syrian war refugees who are largely Muslim men with likely connections to Islamic terrorism.

“Our plan treats the protection of refugees as the objective and national borders as the obstacle,” Soros said.

Through his philanthropies Soros has given more than $100 million to U.S.-based groups that support “immigrant rights,” immigration amnesty, and open borders since 1997. The goal is to flood America with reliably Democratic future voters who will support Soros’s extreme left-wing policy agenda.

Soros and his allies schemed to kill an important immigration enforcement program that President Trump has called “highly successful.” Trump has vowed to restore the Secure Communities program which alerted federal immigration authorities when people were booked into local jails. Jailers sent fingerprints from new arrivals to federal law enforcement, which matched them to files on illegal aliens who could then be flagged for deportation. So of course the Left had to end the program.

Soros’s profits from Humanity Ventures may well be used to import even more millions of illegal aliens into the U.S.

The sky’s the limit with George Soros.

This information all but confirms that the caravans from Central America to the United States are also being funded by George Soros. Voice of Europe (h/t Maurice) How Muslim illegal aliens cope financially during their long journeys to and through Europe has been revealed by the Slovenian site Nova 24. According to the site, UNHCR […]

via DID YOU KNOW that George Soros is providing pre-paid debit cards to illegal alien Muslim invaders from Africa and the Middle East to fund their trips into Europe? — BARE NAKED ISLAM