One of the heightened events of Enemy Patterning buried in our cellular memory history is that of the Luciferian Rebellion which reached its apex during the end of the Atlantian Cataclysm Root Race (human evolution) cycle. From the Guardian perspective this was the end result of our last Aeon or Astrological Age, approximately 26,000 years ago by our human timeline measurement. What resulted in our Atlantian Cataclysm evolution experiment was quite a traumatizing cataclysm that set the events into motion as to what humans would experience in the next Aeon cycle. The last 26,000 years have been a dark cycle of evolution and planetary rule. This is the current age of (de)evolution that is now coming to completion now and through 2012. With the recent timeline intersection, a large chunk of this cellular history has been playing out in our hologram and therefore our lives. We are able to complete this Enemy Patterning now via these new evolutionary intersections. See the Ages of Humanity. 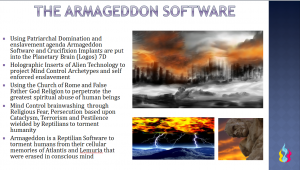 The Armageddon Software Mind Control programs, such as War (Terrorism), Pestilence and Cataclysm fears, or many other fear programs which can be interchanged as they are similar bio-warfare Mind Control programs used on the earth to suppress and control human consciousness by propagating artificially generated False Timelines. This is a Psycho-Spiritual Warfare strategy used against humanity by the Negative Aliens through their False Gods and False Father Satanic religions to use SRA to repeatedly enslave, kill and torture humans through Religious Violence and Military control through terrorism, war and population control. The Armageddon Software is the enslavement companion Mind Control system which is activated through the Crucifixion Implants in Holographic Inserts embedded into the planetary body and human body. The Armageddon Software is a mind control program to terrorize humanity through enforcing the militarization of planet earth and is carried out through Military Grey Alien Technology and the continual development of the hidden underground and space alien technology war machine agenda.