By Pamela Geller – on February 20, 2020 Jihad in America Disgusting. And this is the face of the Democrat party. Ugh. Ilhan Omar DID marry her brother and said she would ‘do what she had to do to get him “papers” to keep him in U.S.’, reveals Somali community leader Ilhan Omar told […]

via CONFIRMED: Jihad-Rep Ilhan Omar DID marry her brother — Wake Up To The Truth 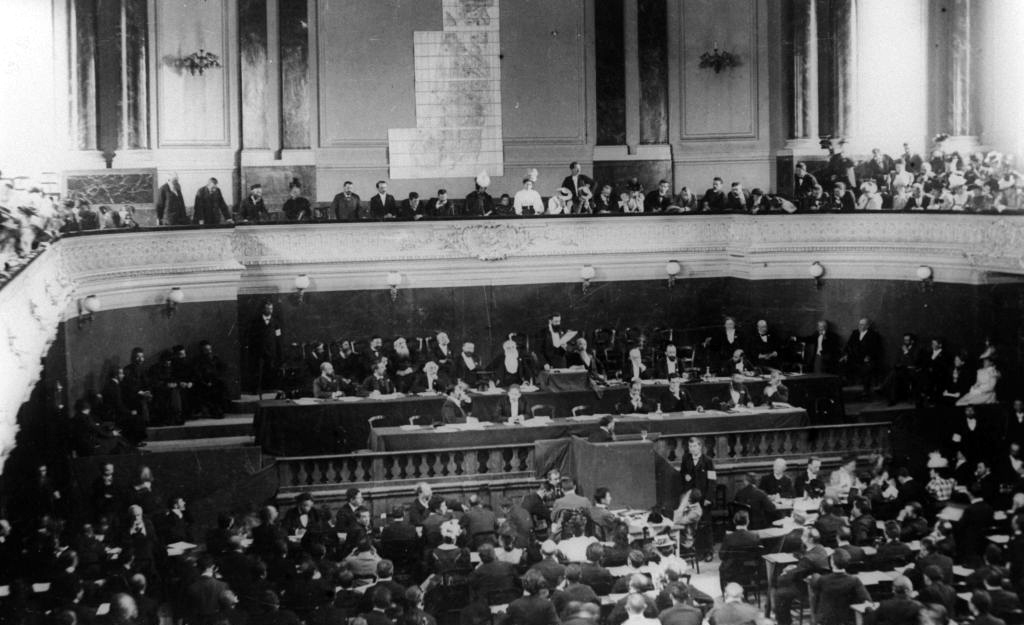 There is a common thread that connects dem0n!c f0rces controlling this planet.

The First Zionist Congress set up the organizational mechanisms that would undergird the Zionist movement during its half-century effort to create a Jewish state. It also led to explosive growth within the Zionist movement as a whole. https://mosaicmagazine.com/observation/israel-zionism/2017/08/the-most-politically-significant-meeting-of-any-group-of-jews-in-the-last-1800-years/

The Secret Behind COMMUNISM – 2013

About the author: Former member of the House of Representatives in Louisiana, Dr. David Duke, is unique. He earned a PhD in history and is a world-famous political figure. In Russia and Ukraine Dr. Duke researched the foundations of Communism and its Red Terror. His book reveals the force behind them that still endangers the world, and it also throws light on the common origins of Communism and Zionism, and how many features of Communism now flourish in Zionism and Israel.

Despite Aleksandr Solzhenitsyn’s efforts – and many others, the truth about the Jewish supremacist role in the creation, execution and maintenance of world Communism, and the “Russian” Revolution [1917] in particular, remains little-known. The reason for this is simple: The Jewish supremacist tribalists who influence major media in the West make sure that almost nothing is said about the fact that Jews, along with organized Jewish support worldwide, not only created Communism, but were the leaders who brought it into such grim reality. They were at the nexus of the greatest slaughter and mass human suffering in history.

The revolution occurred in Russia, and although a percentage of Russians participated it was not a “Russian Revolution.” It was led by an alienated, non-Russian, Jewish ethnic minority that hated Russia, Russians, and the Tsar for their alleged antiSemitism. As will be documented in this book, their fellow tribalists around the world financed, and their shock troops executed the brutal takeover of the Russian government. Upon achieving total power, their deep, psychopathic, racist hatred became manifest in the greatest human slaughter of all time.

Any historian who has studied modem Communism from its ideological origins in Karl Marx and Moses Hess, through the mass dispossession, forced starvations, and Gulags of the twentieth century, is aware that Communists are the real world champions of mass murder. There is no historical dispute that Communist regimes killed many times more innocents than any other government in history, including Hitler’s Germany.

The Red Terror murderers of millions have not been hunted down across the face of the Earth. They have not faced trial for their horrific crimes against humanity. Perhaps even more importantly they have never faced the court of popular revulsion. Why? It is because these Communist perpetrators have been shielded by their tribal brethren who now identify with Zionism who have an inordinate influence on media, academia, and governments.

SPECIAL NOTE: It’s of vital importance for every bioweapon expert, medical researcher, bioengineering scientist and investigative journalist to comprehend the true complexity of this global depopulation scheme and major move toward global governance.  That’s why the following extensive report is a very long read indeed, which will get even longer with each successive update.

The Wuhan coronavirus pandemic is actually an immense and convoluted series of black operations taking place on several levels each with multiple layers, in different dimensions and on every continent.

This is not 5D chess, it’s 12D chess; and it’s been planned for many decades for this very moment in time.  Only with this correct understanding will folks come to apprehend how various furtive operations, which appear to be working at cross purposes, are really overseen by the same plotters.  Some of the most weighty explanations articulated below may even seem to be mutually exclusive—they are not.  Some of the most radioactive info/data is only now being emailed to us as it will continue to be for the foreseeable future.

Return for SOTN ‘Updates’ to access the most current and sensitive intelligence.

‘Staged’ does NOT mean this is a hoax; only that many pieces of this op are choreographed and carried out to have maximum effect on targeted populations.

State of the Nation

QUESTION: Is the bioengineered coronavirus pandemic being purposefully propagated globally in order to further facilitate the military deployment of 5G worldwide?

The answer to that critical question is of paramount importance to every person on the planet because of how forcefully the 5G juggernaut is moving across the land.

We all knew ‘they’ were going to do something big—VERY BIG!

But the rapidly unfolding depopulation scenario that utilizes the Wuhan coronavirus, 5G, forced vaccinations and chemtrails is quite ambitious by any standard.

There’s nothing more sacred to the implementation of the New World Order agenda — WORLDWIDE — than the meteoric military deployment of 5G and subsequent build-out of the Internet of Things (IoT).

Truly, this absurdly impossible project represents the capstone of the nefarious NWO conspiracy to stealthily inaugurate a One World Government.

Nonetheless, the NWO globalist cabal has gone completely mad and they will try whatever they can to set up their long-planned Global Control Matrix, which requires a fully operational 5G energy grid as a prerequisite to a fully functioning Internet of Things.

Wuhan City was established as an official 5G Demonstration Zone in 2019.  The Chinese government planned on using that major metropolis as a showcase for all the ‘dazzling’ benefits that a 5G energy grid is supposed to offer wireless IT users. Then they planned on setting up Wuhan City as an urban flagship for the Internet of Things.

Now, this is where the plot thickens.

The Zionist Government of Israel has made it a global mission to commandeer the military deployment of 5G throughout the world community of nations.

Because the future capital for the planned One World Government is Jerusalem, the ruling ZIONISTS know they must control the entire 5G roll-out, just as they are presently (and unlawfully) doing in the USA. There is no greater promoter of 5G than President Donald Trump, which is why he has even stated with great pride that he can’t wait for 6G in the United States!

There’s only one way to correctly comprehend the pivotal role that Israel plays in the emerging New World Order.  The rogue, criminal, apartheid State of Israel was literally created as the global headquarters for the Khazarian Mafia high command.  Which begs the question:

How, exactly, was Israel established and empowered over the course of the 20th century?

It’s entirely true that: “Each of the above-listed cataclysms was stealthily carried out to create the modern State of Israel and/or to greatly advance the clandestine Greater Israel project.”

Implications of 5G on human biology are staggering

Dangers Of 5G – 11 Reasons To Be Concerned

The following was posted at http://thecontrail.com Beyond China, this crisis might also be used by governments in different parts of the world that want to transition to a “cashless society” to justify their actions.  Read more at https://news.bitcoin.com/china-cash-virus/

The forces of darkness know precisely how to get people to give them what they want.

Please share our posts so people see the magnitude of what’s at hand, and offer another perspective beyond mainstream  propaganda. Thank you.

PS
Quote ‘When you know better, you do better’ is from Dr. Jack Kruse.

Editor’s Note: (Thank you J!) Well…here we go folks…! The truth is BEing revealed showing how those of the Dark (including Joe Biden, his son Hunter, and others) have colluded with child pedophilia issues and a whole host of other apolitical, non-judicial, and down right evil practices and behaviors all aimed at the destruction of […]

Originally posted on Banned Hipster: Ever since Trump won the idea of a “deep state” started gaining currency among pro-Trumpers. The mass media first attacked this talking point as a “conspiracy theory” only to later start claiming that yes, there is a Deep State and it’s good that the Deep State is “protecting democracy from…