Is the New World Order a Jewish Conspiracy? No, it’s a Satanic Conspiracy

“It’s all a Jewish Conspiracy”

I have seen and heard many people write and utter these words in reference to the worldwide conspiracy and New World Order. Indeed, this idea has been around a long time. It was a central ideological tenet of the Nazis, as well as Nazi sympathizers and apologists. However, hopefully now we are at the point in our understanding where we can cut through the confusion.

Thanks to the recent book The Trigger by David Icke, the work of researchers who have investigated the history and origin of ‘the Jewish race’ (which doesn’t exist), the work of those who have exposed the Khazarian connection to Jewishness, and the work of those who have exposed Sabbatean-Frankism cult, we can now talk about this taboo topic with facts, reason and clarity. We don’t have to blame the many or a collective (the Jews) for the actions of a few. We don’t have to be unfair to all the innocent Jews who have unjustly branded as conspirators when many of them are victims not perpetrators of the grand conspiracy. No, it’s not a Jewish conspiracy, not exactly …

The Deliberate Confusion around Jewish Identity: The Triangle of Race, Religion and Nationalism

Jew and jazz player Gilad Atzmon grew up in Israel but once he carried out his forced ‘service’ in the IDF (Israel Defense Forces), he became a changed man. He saw through the one-sided Zionist propaganda. He describes in his book The Wandering Who? A Study of Jewish Identity Politics that during the 1982 Israel-Lebanon War, he caught a glimpse of captured POWs. He writes that “the place was a concentration camp. The inmates were the ‘Jews’, and I was nothing but a ‘Nazi’.” He has since been very outspoken against Israeli behavior and Zionist crime. One of his favorite sayings is that “Jewish power is the power to stop you questioning Jewish power.” Atzmon likes to point out the contradictions and confusion behind Jewish identity. What makes someone Jewish? He claims that Jewish power is displayed through Zionist politics which capitalize on people’s confusion around Jewish identity – the triangle of race, religion and nationalism – and that Zionist power brokers claim Jewishness is whatever they find most convenient at the time. “If you try to pin them down, you can’t catch them,” says Atzmon.

The Carefully Cultivated Myth of the Jewish Race and Jewish DNA

For most people, the immediate answer would be that being Jewish means you are either ethnically Jewish (of the Jewish race, with Jewish DNA) or you are religiously Jewish (a follower of Judaism). However, here’s the problem: there’s no such thing as a Jewish race or Jewish DNA. That is a carefully cultivated myth which suits many purposes.

Firstly, it united Jewish people who up until that point had lived in many different countries. Secondly, it transformed the focus of Jewish identity from religion-based to race-based. This prepared the way for Zionism, a political philosophy or nationalistic movement. It is easier to convince a race of people to be nationalistic – to move and create a new homeland – than adherents of a religion. In many interviews such as this 2009 one with RT, Jewish professor and historian Shlomo Sand (author of The Invention of the Jewish People) says that it is simply not scientific to say a ‘Jewish people’ as Jews are connected by customs, beliefs and religion, not race, genetics or DNA. He highlights how the Nazis tried defining Jews racially but that didn’t work, because ultimately they couldn’t define who was a Jew. He points out with great evidence that Jews have always been a religious community which has included many converts.

Many orthodox Jewish rabbis have explained why traditional Judaism is diametrically opposed to Zionism. Judaism and Zionism do not mix, as Zionism violates cherished tenets and commandments of the Torah and is basically a modern settler-colonial exploitation and theft of land, and is often accompanied with a mindset of viewing Arabs as inferior or even sub-human. In presentations such as this, Jewish Rabbi Yaakov Shapiro makes many fascinating points about Jewishness and Zionism which contradict commonly held ideas about them:

– Zionism was NOT created to deal with antisemitism. The truth is Zionism was created to make a Jewish homeland, according to Max Nordau, assistant to Theodor Herzl;
– Historically, Jews were just part of the religion of Judaism. You could not be a Jew in any other way. They are not an ethnicity and they are not a race;
– The Holy Land of Jewish people is the Torah or the Synagogue, not a geographical location/piece of dirt;
– Many Jews converted to become to Jews, but how could this be if Jews were a race? You can’t convert to a race;
– Ze’ev Jabotinsky, the founder of Jewish terrorist group Irgun (later absorbed into the IDF) and a leader of Revisionist Zionism, was recorded to have said: “The Jewish people are a nasty people.” Jabotinsky profoundly influenced future Israeli leaders Menachem Begin and Benjamin Netanyahu;
– the Jewish nationalist movement was very similar to black nationalist movement; they just decided that all black people were a “nation” and that all Jews were a nation. Now Jews didn’t have to be religious, but rather:
1. Loyal to Nation (Israel),
2. Speak Hebrew (now a national language not a holy language as it originally was), and
3. Fight in the Israeli military;
– First Israeli Prime Minister David Ben-Gurion said he didn’t believe in the (Jewish) God of the Bible, yet God promised them the land;
– Zionists convinced and tricked the Jews that they were a nation, not a religion;
– Zionism turned religious Jews into militaristic Jews. Zionism mocked Judaism. It hijacked the definition and essence of Judaism and Jewishness. The messiah of Zionism is the Holocaust (a holocaust museum is set up in every town, more than a synagogue).

Jewish Rabbi Yisroel Dovid Weiss also makes similar points about Jewishness, Judaism and Zionism. This perspective is completely in alignment with the many Jewish groups, organizations and voices which oppose Zionism. 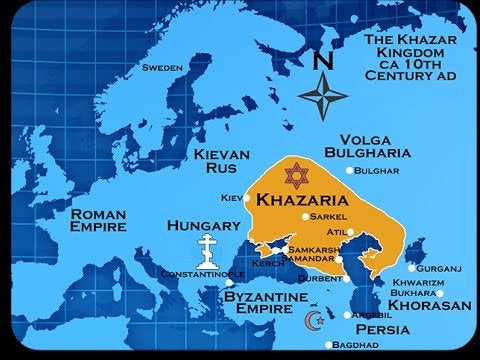 Khazaria – the missing key to explain part of the so-called Jewish conspiracy. There is no Jewish DNA. Khazaria is the biggest source of Ashkenazi Jew genes. Read more at https://thefreedomarticles.com/jewish-conspiracy-no-sabbatean-frankism-satanism/?owa_medium=feed&owa_sid=

The reality of our situation

“Sabbateanism [Satanism, Cabala] is the matrix of every significant movement to have emerged in the eighteenth and nineteenth century, from Hasidism, to Reform Judaism, to the earliest Masonic circles and revolutionary idealism. The Sabbatean “believers” felt that they were champions of a new world which was to be established by overthrowing the values of all positive religions .” – Gershom Scholem (Respected Jewish scholar) THIS IS THE ORIGIN OF THE ILLUMINATI AND COMMUNISM

Much of what is being revealed impacts every man, woman, child because escalating chaos is deliberate, to pit man against man to the ‘extreme’ so people eventually cry out for government to end it, which is consent for globalists to finalize their centralized totalitarian one world government.

The electoral process was designed to give politicians power over the people; politicians who work for the central banks not the people, which created our perverted, dark reality that now requires an open mind, change of heart and lawful action to remedy.

COME OUT OF HER!

Revelation 18:4 King James Version (KJV)
4 And I heard another voice from heaven, saying, Come out of her, my people, that ye be not partakers of her sins, and that ye receive not of her plagues.

Private Immunity Law case filed in the USA will not work in Canada because of the Canadian system of governance.

Lawful action in the USA – Award granted Aug 19.19 and opt in

DISCLAIMER
This information is not intended to provide legal or lawful advice. It is for educational purposes only.

Please inform others. Thank you.