In America you may commonly encounter two kinds of “Legal Persons”, rarely encounter one kind of “Lawful Person”, and American State Nationals who are people who owe no public service obligations beyond keeping the peace and harming nobody.
Unfortunately, mis-administration of our affairs by two Foreign Subcontractors acting in Breach of Trust has led to millions of Americans being “impersonated” — that is, unlawfully converted into “persons” instead of being recognized as part of our American populace and people.
In 1860, one-third of our intended Federal Government, the American Subcontractor hired to provide services to our States, became inoperable.
From our perspective this situation was and is similar to what would happen if the young man we hired to mow our law broke his leg.
We can simply hire someone else or do the job ourselves —- if we know what happened and are enabled to take appropriate action.
But our two remaining European Subcontractors acted in Breach of Trust, did not provide assistance or disclosure, and instead usurped upon the actual people and government of this country.
They pretended that because we did not Reconstruct the missing third of the Federal Government, that our entire government was “absent” — and used this as an excuse for fraud and usurpation.
The British Territorial United States seized upon our good names and assets as “presumed salvage” to be claimed and accidentally-on-purpose misidentified millions of American babies as British United States Citizens— all of whom are Legal Persons.
The Roman Municipal Government similarly sought to enrich itself and made counterclaim that, no, we were “citizens of the United States” instead — and they moved to probate our estates.
All this bunko, all this theft and abuse of their employers — made possible because we didn’t hire someone new to mow our lawn.
I am going to share a simple video by Canadians who suffered a similar fate, which explains more of the process by which we have been mis-characterized and mis-identified— with one caveat.
There is a quote by Karen Hudes and Karen doesn’t know our history. She says at one point that in 1933 “this country went bankrupt.” This is not true.
This country is a sovereign entity. It’s not eligible for bankruptcy, nor in need of it, because it is not an incorporated entity. No, what happened is that Delaware Corporation owned and operated by the Roman Catholic Church and doing business as “the” United States of America, Incorporated, went bankrupt.
That was no more this country than I am my own shoe.
She went on to try to explain away the criminal securitization of the American People as part of paying back the debts of this foreign corporation, but that isn’t true, either.
https://youtu.be/IQKn_xw1n28
What happened is that FDR “pledged” the Federal Civil Service Municipal Employees as assets backing this bankruptcy during his First Inaugural Address, and the Conference of [British Territorial State of State] Governors similarly pledged U.S. Military personnel and their Dependents via a similar action, March 6, 1933.
None of that had anything to do with us, and the only way that FDR and the “Governors” were able to get away with it was as a condition of employment and private contract.
This abuse of our Federal Employees encouraged those benefiting by it to secretively extend these outrageous claims against rank and file Americans who are not functioning as Legal Persons and not subject to any such demands.
So as you watch this little video bear in mind that it was made in Canada and that the people speaking don’t know our history.
And if you are someone born in these fifty States of the Union, I hope you will make haste and go to: www.TheAmericanStatesAssembly.net and begin the process of declaring your birthright political status. We need as many Americans as possible to “come home” and help correct 160 years of virulent fraud.
—————————-
See this article and over 2200 others on Anna’s website here: www.annavonreitz.com 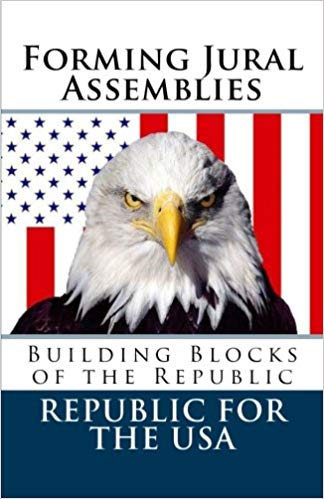 By Anna Von Reitz
The War Powers Act has nothing whatsoever to do with the actual States of the Union nor the People of this country.  Likewise, the Reconstruction Acts concern only the “reconstruction” of Federal States of States. Not States of the Union.
Two different things.  Apples and oranges.  American and “US”.
The Lieber Code and all the rest of it applies only to  “US citizens” — that is, Federal Civilian and Military employees and their dependents. Just like any other corporation’s administrative “codes” and “polices” apply only to the employees of that corporation.  This is not rocket science and it is nothing that we don’t already know as a result of dealing with other commercial corporations every day.
So, if you aren’t actually getting a paycheck as a Federal Civilian or Military Employee or Dependent, what in the name of Charles Bronson are you doing claiming to be or wanting to be a “US citizen” of any kind?
Once you realize that — and know for sure that the rest of us realize it, too–a great many other things fall into place.
The War Powers Act is applicable to the Territorial Military Government under contract to our American Government and all its “US Citizens” in the same way that the laws of Mitsubishi Corporation apply to Mitsubishi employees, but not to the owners of a Mitsubishi motorcycle.
You are still mistaking the Federal Government for the American Government, and they are not “the same” and never were.  The Federal Government, including the Territorial Branch of it, is under contract to provide services to our States as clearly explained in all three Constitutions.  The Territorial and Municipal Branches of the “Federal Government” both operate as commercial corporations, like General Electric and IBM.  Hello?  Hello?
The American Government — our States of the Union — created the Federal Government to provide stipulated mutual services.  We did not create it to rule over us.  We did not give our employees carte blanch to boss us around and abuse us in the name of protecting us.
And we are not naturally “US Citizens” of any kind.  We are not receiving a paycheck from the corporation.  We are not obligated to wear a uniform.  It is not our “duty” to serve the corporation, it’s the corporation’s duty to serve us.
We are the employers and the “US Citizens” are the employees.
So, we’ve got a whole lot of people misidentified as employees of the Federal Corporations — Americans who are wrongly being taxed and bossed around and held to the Public Policies of the Federal Corporations who are in fact customers of the corporations, and not employees at all.
It’s like being commandeered by J.C. PENNY.
You and your idiot buddies are stomping and ranting and trying to say that we should consent to this and we should just comply and be nice little US citizen slaves for Wall Street —when we own Wall Street and don’t have to live as slaves.
There is nothing sacred about US Citizens or US citizenship sum total. For the vast majority of  Americans, it is not a beneficial political status to be in.
If an American decides to go to work for the Federal Corporations providing our States with services — federal civilian and military contractors — that’s fine. They need to obey every jot of their Federal Corporation’s policy and code or quit their jobs.
Not the rest of us.
The rest of us are being unconscionably imposed upon and pillaged, using the excuse that we were somehow all transformed into “US citizens” without our knowledge or consent— and all as the result of falsified registrations misidentifying us as “US citizens” and  all done “for” us by our “US citizen” employees.
That is not a service we authorized the Federal Corporations to do “for” us.
That is called kidnapping, shanghaiing, mischaracterization, impersonation, and press-ganging.
And you are telling the victims not to take action to free themselves from this outrageous criminal “presumption” of “US citizenship”?
And pretending to be their friend and giving them good advice?  Bushwah!
Here’s my advice:
Any American who can expatriate from such a false and foreign political status as presumed “US citizens” should immediately do so without a backward glance.  Then you can start telling your employees — all those actual “US citizens” — what their job really is.
—————————-
See this article and over 1500 others on Anna’s website here: http://www.annavonreitz.com
To support this work look for the PayPal button on this website. 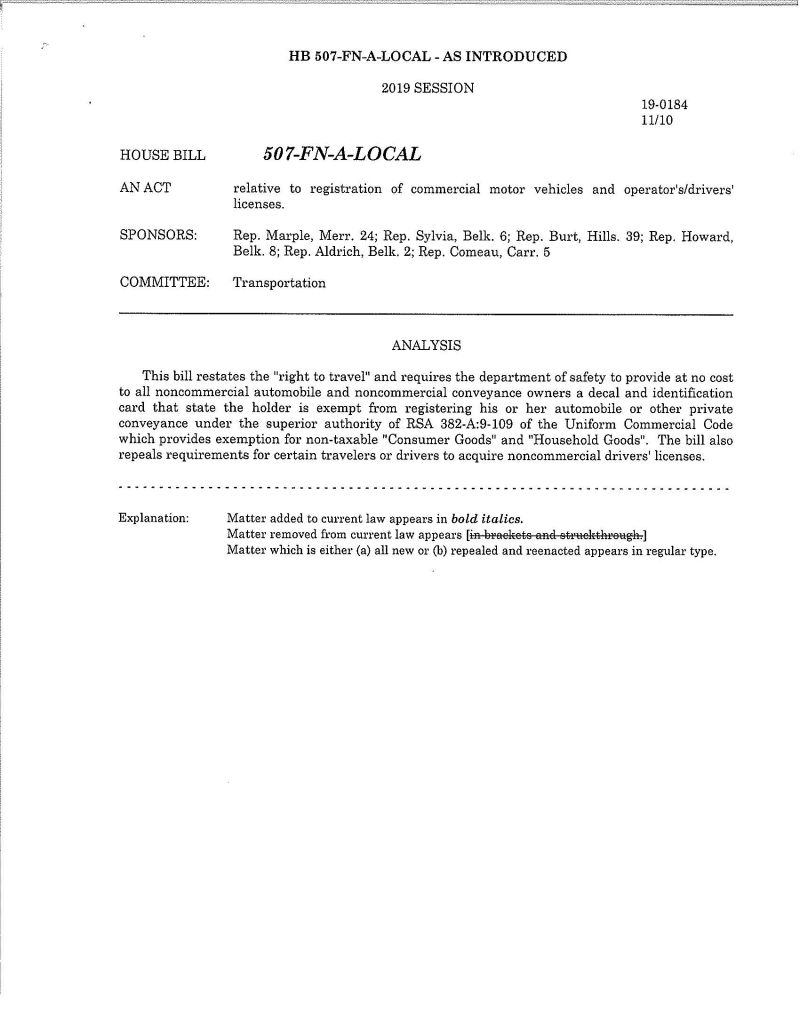 The number HB 507 was assigned to this proposed legislation just 36 hours ago. I have scanned it and it is now available for massive distribution throughout the entire 50 sovereign states as the SILENCE of corporate employees exists in every state. The people are “unaware that they are unaware”. We NEED publicity of every kind, talk […]