Douglas Gabriel reviews the crimes Bill Gates has committed against humanity in the audio below. The details are posted below the audio. Share wide and far. Vaccine Warlord – King of Depopulation and Eugenicists https://aim4truth.org/wp-content/uploads/2020/04/Bill-Gates-Vaccine-Warlord.mp3. Raw audio file: https://aim4truth.org/wp-content/uploads/2020/04/Bill-Gates-Vaccine-Warlord.mp3 . Bill Gates Crimes Against Humanity Started the Global Alliance for Vaccines and Immunization (GAVI) in…

A grand total of 70 coronavirus vaccines are being developed in labs around the world, according to the World Health Organization (WHO). 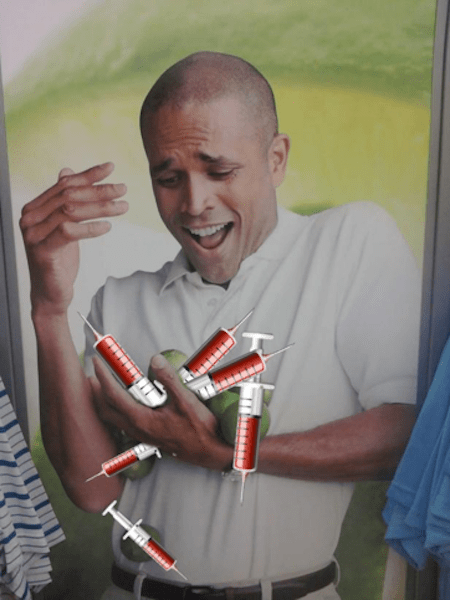 Why can’t I hold all these vaccines?

It’s unsurprising so many folks are working around the clock to knock this thing on the head, given how much it’s donging up the planet. But due to the trial-and-error nature of developing vaccines, it will probably be next year at the earliest before we have a viable vaccine for public use.

I know we’d all like to get this this thing into our veins ASAP. But in terms of vaccines, this is actually a drastically expedited development schedule.

Typically, it takes 10 to 15 years to get a vaccine to market. But, you know, I would like to go outside sometime before Taylor Swift is elected president of the 44 U.S. states (yeah, we’re going to lose a few).

A vaccine developed by the Beijing Institute of Biotechnology is currently the frontrunner, having entered Phase Two trials. Two other vaccines, developed by U.S. drug manufacturers Inovio and Moderna, are also testing on human subjects (after human testing, they’ll graduate to trials on the ancient space lizards who run the planet).

Given the gravity of the situation, Moderna got approval from the FDA to skip animal trials and proceed directly to humans (a step we usually take to avoid people’s heads exploding and stuff).

Some organizations believe they can knock out this bad boy even quicker than the current projections. Oxford University Vaccinology Professor Sarah Gilbert told the Times of London that, if all goes according to plan, her team will have a vaccine ready by fall 2020.

Can They Stop the Meltdown?

The Fed has taken unprecedented action to offset the economic destruction caused by this whole global pandemic thing.

They used their so-called, last-resort nukes and bazookas. They’ve thrown the kitchen sink at it. Heck, they’ve even tried buying it dinner and taking it back to their place.

But has any of this drastic action worked? Has the Fed successfully stopped a total market meltdown?

Macroeconomist and editor of Money & Crisis Graham Summers has the answer in today’s one last thing.

A Cunning Approach to Save Stocks

The Fed has effectively nationalized the U.S. debt markets.

Last Thursday, the Fed announced a $2.3 trillion (with a “T”) monetary program.

In its simplest rendering, the Fed announced it would expand its current quantitative easing (QE) programs for municipal bonds, asset–backed securities, and investment grade corporate debt. The Fed also announced it would begin buying junk bonds — for the first time in history.

Thus, the Fed is now intervening directly in:

It’s also worth noting that the Fed is even buying bond exchange traded funds (ETFs) which trade on the stock market just like regular stocks.

At this point, the only asset classes the Fed isn’t buying outright via a publicly acknowledged QE program are stocks and commodities.

Again, the Fed has effectively nationalized the U.S. debt markets. All in the span of just six weeks.

It is almost impossible to express the insanity of this.

Perhaps the easiest way to make sense of this would be to say that the Fed just printed the GDP of Brazil in the last six weeks… and is planning on printing the GDP of France in the next six weeks.

The multitrillion–dollar question now is if this will stop the meltdown triggered by the economic shutdown in the U.S.

Going by the current charts, the answer is “yes.”

Moving in the Right Direction

The below chart has the following breakdown:

Investment grade bonds, junk bonds, and stocks are all moving sharply higher. In fact, stocks are actually the weakest performers here, trailing the other two by a wide margin. 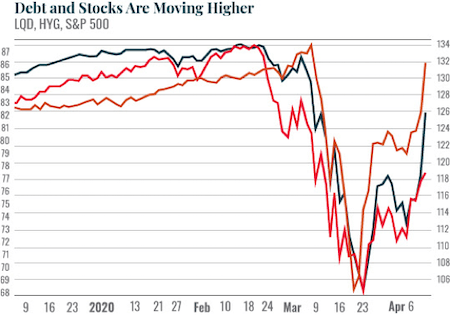 The strategy here is simple…

Put another way, the Fed is trying to manipulate stocks higher indirectly without actually announcing “we are buying stocks now.”

The reason is that while the debt markets are more important from a systemic purpose, stocks are the asset class that bring financial problems to Main Street’s attention.

Every American knows if the stock market is crashing.

Indeed, I believe the Fed is actually now intervening in the stock market on a near daily basis to ensure that things don’t collapse again.

How I Think the Fed is Secretly Boosting Stocks…

See, I recently discovered a strange phenomenon happening in the stock market.

It happens about 30 minutes into the trading day.

I’m talking about massive covert trades being used to prop up the market.

These trades are so big that I’m convinced that they could only be from the Federal Reserve.

But here’s what really matters…

If you can track these huge trades in real–time, you’ve got a strategy that hands you the opportunity to continually make money in the markets.

And that’s just what I’ve done.

I’ve put all my research on this stunning new development in a special presentation.