America is Led by Murderers – What Can Citizens Do? 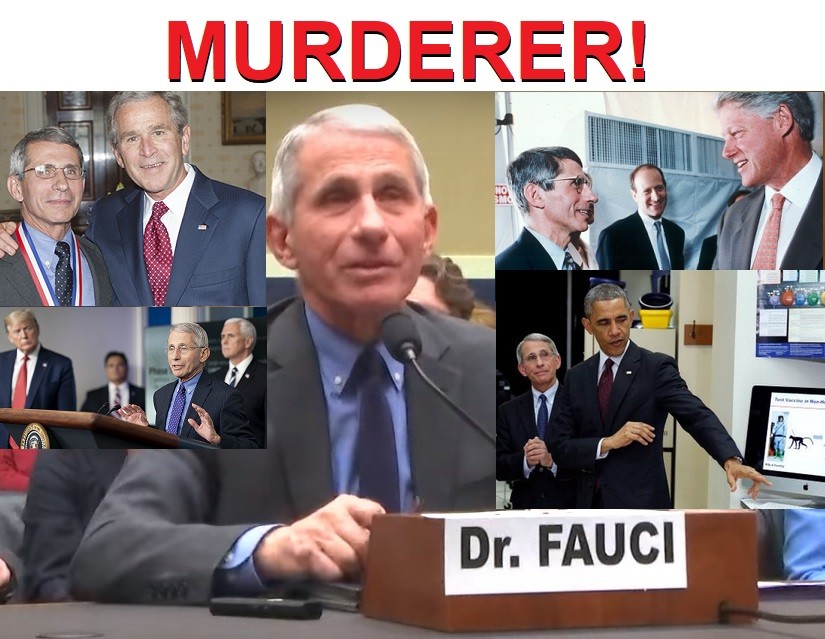 There is overwhelming evidence that Dr. Anthony Fauci, the director of the National Institute of Allergy and Infectious Diseases since 1984, is guilty of mass murder.

Earning huge profits from the pharmaceutical industry, he has been the main leader in the United States controlling the Coronavirus response, which has included squelching public information about hydroxychloroquine, a safe FDA-approved drug which has been in the market for decades, and which thousands of doctors are now saying has a 100% cure rate for patients diagnosed with COVID-19.

This action alone has led to tens of thousands of needless deaths, as well as billions of taxpayer dollars spent on “new” cures for COVID-19, such as the very profitable Remdesivir, and the upcoming COVID vaccines.

He seems to wield more power and influence than even the President of the United States.

So is there no way to stop him or bring him to justice?

What Dr. Fauci and others like him who are complicit in mass murder has is unlimited financial resources, as he is part of the Wall Street Central Bankers who pretty much control the affairs of the world through International organizations such as the World Health Organization, the World Economic Forum, the Council on Foreign Relations, and many other organizations that are linked to Central Bankers.

What allows this small group of Billionaires to control the affairs of the world and get away with mass murder is not their wealth, however, but a compliant and non-resistant citizenry.

They use subtle mind-control techniques to control narratives, and they also use the media, and especially today in the 21st Century, they use Big Tech to squelch freedom of thought and expression.

They keep the masses fighting each other instead of them, by creating political and social divisions that the masses in large part do not even understand originate from this small group of wealthy people.

And when you get to the top of the power structure of these people, you will see they are not very nice people at all. They are very evil. They are Satanists who are involved in the Occult and they are pedophiles and murderers. To learn more about this, see:

What Can Citizens Do?

The political system in the U.S. is thoroughly corrupt. Our Constitutional principles, originally drafted and implemented to protect citizens against the over-reach of a tyrannical government, pretty much died in 1913 when the Federal Reserve Bank was setup to control the monetary system.

Bankers and Wall Street have pretty much ruled the nation ever since then. They control the Presidency, the Congress, and the Supreme Court.

Here are a couple of suggestions I have today, here in July of 2020, of how citizens could potentially take back the country away from the powerful bankers and Wall Street.

One of the provisions of the Constitution that is supposed to give the citizens of the United States access to justice, apart from the three branches of the government, is the Grand Jury.

Larry Klayman, founder of Judicial Watch and Freedom Watch, has been one of the main proponents of citizens’ grand juries in recent years. He has a website here devoted to the topic.

Writing for Newsmax.com in 2018, he explained:

There is only one way that the nation will restore itself to equal justice under the law, as it was designed on July 4, 1776, in my birthplace of Philadelphia.

In this regard, We the People must now take a page from the “Old West,” before there was any U.S. Department of Justice, and implement citizens’ grand juries, citizens’ trials, and legal citizens law enforcement.

In this regard, our venerable and regrettably now deceased Supreme Court Justice Antonin Scalia ruled in the landmark case of United States v. Williams, 112 S. Ct. 1735, 504 U.S. 36, 118 L. Ed. 2d 352 (1992), that the grand jury under our Constitution does not belong to any of the three branches of government, but instead to We the People.

As a result, the citizenry are empowered to empanel grand juries, indict, try, convict and mete out sentences for those accused of crimes.

He goes on to explain how he previously put this law to practice in Ocala, Florida:

A few years ago, I, as the prosecutor and a Florida lawyer, empaneled a citizens’ grand jury in Ocala, Florida, …picked the jurors randomly from voter rolls as is done by federal and state courts, and advised the accused, in this case Hillary Clinton and Barack Obama of the proceeding and offered to allow them to testify, and then presented evidence to the citizens grand jury when they did not appear.

As a result they were indicted for alleged crimes concerning their manifest harm to national security over Iran which not coincidentally involved leaking classified information about our cyber-attack on Iranian nuclear reactors. This classified information was illegally leaked to bolster Obama’s and Clinton’s political fortunes.

A trial then ensued, presided over by a neutral judge picked from the Ocala community, and Clinton and Obama were convicted of crimes. At the time, we did not seek to enforce the convictions. (Source.)

I am not sure that trying and convicting politicians is the best route to go in using a citizen grand jury, however, when it is Wall Street Bankers who are mostly responsible for these crimes against the American people. I would prefer citizen grand juries to be non-partisan politically. And instead of trying politicians, let’s try Wall Street executives who always buy their freedom and avoid justice. Anthony Fauci and Bill Gates would be two good examples to start with.

Also, if this method were to be employed today against those enforcing the COVID response, enforcement of convictions would be necessary as well.

This would probably involve a Civil War, as most of the armament in the U.S. is controlled by the Government, and there would need to be enough defectors to participate in Civil Disobedience. But I believe there are enough good people in the military and in law enforcement who could make a difference if they defected.

But for those who are not spoon-fed the propaganda from the corporate media with the dissenting voices being squelched by Big Tech, it is obvious that we are already in a Civil War. Some people are just confused about the “sides.”

It is not a war between liberals and conservatives, or the Left versus the Right, or white versus black, but the average citizens against the Wall Street Bankers.

Anthony Fauci, for example, whom I believe should be one of the first persons tried by a citizen grand jury since he is on the public payroll, has served both Republican and Democratic politicians.

Politicians have been used by the billionaires on Wall Street, most of whom are part of the pharmaceutical industry, to order Americans to stay home so that they can destroy the economy and transfer TRILLIONS to themselves.

It is well established now that the lock downs have caused more illness and deaths than “the virus.”

But what if the tables were turned?

Everything the tyrants use to achieve their goals is dependent upon others to fall in line.

The Big Tech executives, for example, just appeared before Congress yesterday. But what will be the result? Probably nothing. After all, the members of Congress for the most part work for these Wall Street Billionaires!

We have seen the effects of how just a few dissenters and whistleblowers can have a massive influence on the public. We saw it this week with the Frontline Doctors who came to Washington D.C. and held press conferences and seminars to expose the truth.

Censorship for the most part did not work, because enough people were dedicated to keeping their message alive and distributing it to as many people as possible.

These doctors are being attacked by the Globalists now, just as they have done to every other whistleblower who has come forward to share the truth. Dr. Judy Mikovits is another example of someone who has put everything on the line to share the truth, as are Julian Assange and Edward Snowden in recent years, who are treated as criminals instead of whistleblowers who brought the truth about corruption to the masses.

The Big Tech companies have a huge number of employees, and if you work for Facebook, Google, or Twitter, you are complicit with the crimes committed by your employer.

If any of you want to come forward as anonymous whistleblowers, you are welcome to contact Health Impact News. And if enough employees decide they are not going to participate in these crimes any longer, they have the power to cripple the operations of these evil companies, if they value freedom, the truth, and human life more than they value their paycheck, and devise a plan to work together from the inside.

I am not claiming that any of these actions are the correct path to take, but it is time to start thinking and discussing these kinds of things. If you are still holding out hope that a politician or the political process can somehow turn all this around, you are not living in reality any more.

The war is between the masses and the Global Wall Street bankers, and we have no chance of success if we continue to fight among ourselves, not truly recognizing who the real enemy is.

We need to set aside our political and religious differences, and unite for a common cause of liberty, truth, and the value of human life. We must not succumb to fear, but press on in faith that good will triumph over evil, that God will triumph over the Devil.

Because if we fail, murderers will continue to run this country, and we have not seen the worst yet.

Having problems receiving our newsletters? See:

How to Beat Internet Censorship and Create Your Own Newsfeed